The new edition of Arquinset starts off with an encounter for “Creating a public database of real estate corpses" and a workshop: "Document from the air" organized by Basurama. A premier of the documentary "Empty Houses” by Marisol Soto Romero and Manuel Muñoz Monterde closes this year’s architectural week.

"Ladrillazo" is a card game that tells the story of the Spanish real estate bubble during the early twenty-first century. Players assume the role of facilitators or intermediaries and handle the cards that represent the key players like politicians, developers, media ... all of whom have have to team up in order build infrastructure or housing projects . All cards represent real life individuals, companies, territories, events or projects that o existed, the information is based on public knowledge and press releases.
"Ladrillazo" is currently under development, in preparation for commercial launch in early 2015. It can play two to six people, ideally three to five. The games last between one and two hours .

This multidisciplinary encounter is to create a publicly accessible database of the leftovers from the burst real estate bubble such as half-finished buildings, urbanized land without construction, empty housing and abandoned buildings. The aim is to create a database that can help to quantify the state of the post housing bubble and search for possible solutions.
The aim is to discuss and map the differing interests of the participants (planners, environmentalists, journalists, activists) and define the common aims and information for the database. It will be difficult, if not impossible to tackle this task on a national level in a weekend. However, it may be the beginning of a collective project that will take its first steps toward publicly shared interests and resources.

Workshop "Document from the air"

Photographic documentation workshop ("defending the territory from the air") from the air with kites and balloons organized by Basurama in Plaça Glories, Barcelona. We will use tools and methodology of open source programs and hardware from Public Lab, a urban-science network of that promotes the use and development of low cost digital systems.

Premier screening of the documentary about the impact of the housing bubble, script Marisol Soto Romero, realization Manuel Muñoz Monterde.
There are two contradicting views on the issue of housing: some say that hosing is a basic necessity, a right that is protected both in law and in universal declarations whilst others treat it as mere investment value and potential business. TV documents will release in La 2 of TVE "Empty Houses", a documentary with two chapters of 55 minutes, one named “New Ruins” the other “Homeless”. They shows Spain’s post real estate bubble landscape and focuses on the challenge of dealing with millions of unoccupied buildings, oversized vocational enclaves and half finished, fragmented and dispersed suburbs whilst the numerous group of victims, who lost work and home by eviction, plea for a place to life.

Sumary of the session 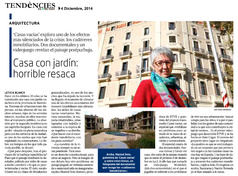