The remains of a typical Catalan farmhouse, strategically situated on the top of a hill, marked the location and scale of the future single-family house.
Although the precarious state of the ruin made it necessary to create a new and independent structure, we did not want to renounce the original buildings richness of textures and layers that had been acquired throughout its transformations and from a humble refuge in the 17th century to a relatively significant farmhouse in the 19th century.
The concept of “a house inside a house” was the starting point for a project that distinguishes, in a material and architectural way, the “double-take” of old building and modern house. The new building features contemporary style and dimensions with large openings and industrial finishes (concrete floor and ceiling, glass doors, aluminium carpentry, large windows and exposed plastered walls) whereas the farmhouse’s outside walls (with brick lattice to filter the light, conceal the large windows) were completed following the proper rules of the original building.
The demanding standard of craftsmanship required for the restoration work of the original structure was applied with equal rigor in the new construction, resulting in different tonalities of manual plaster work on walls and concrete floors. The richness of textures and materials can be specifically appreciated in the areas where the interior walls draw back to frame the texture of the original walls, and where the exterior lattice wall expands to veil the large windows.
The combination of the “brutalist” interior and the “contextual” exterior creates a moderate but surprising building. From the outside, the house seems solid and impermeable, whilst the interior offers maximum transparency and long interior and exterior views that cross several rooms and a double height hall. The colour and simplicity of the furniture and fabrics (many of which have been specially designed for the house) relieves the austerity of the interior and connects with the exuberance of the nature outside. 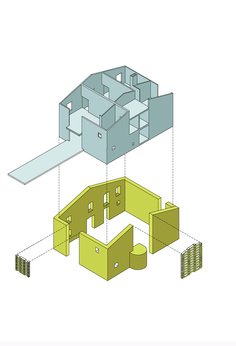 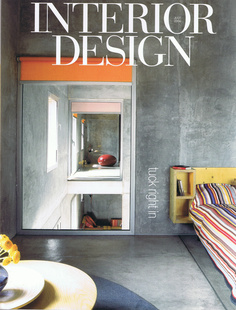