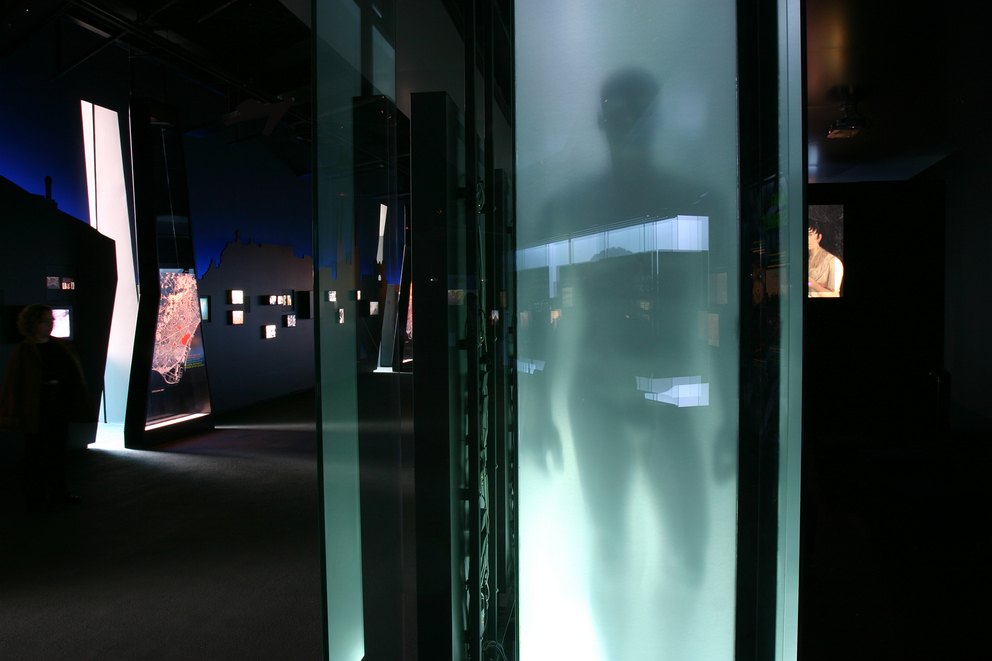 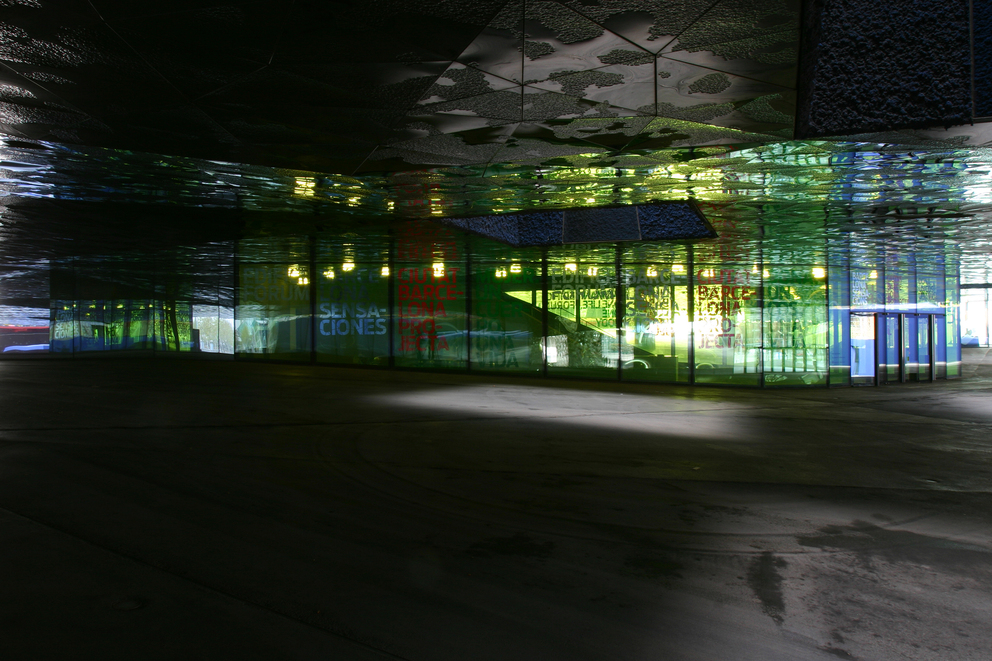 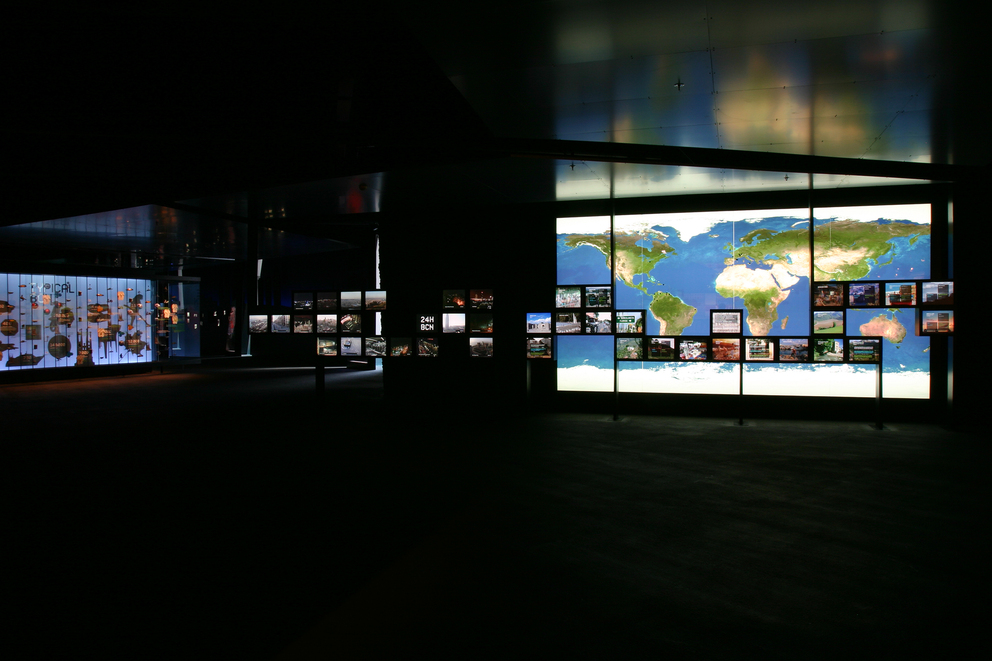 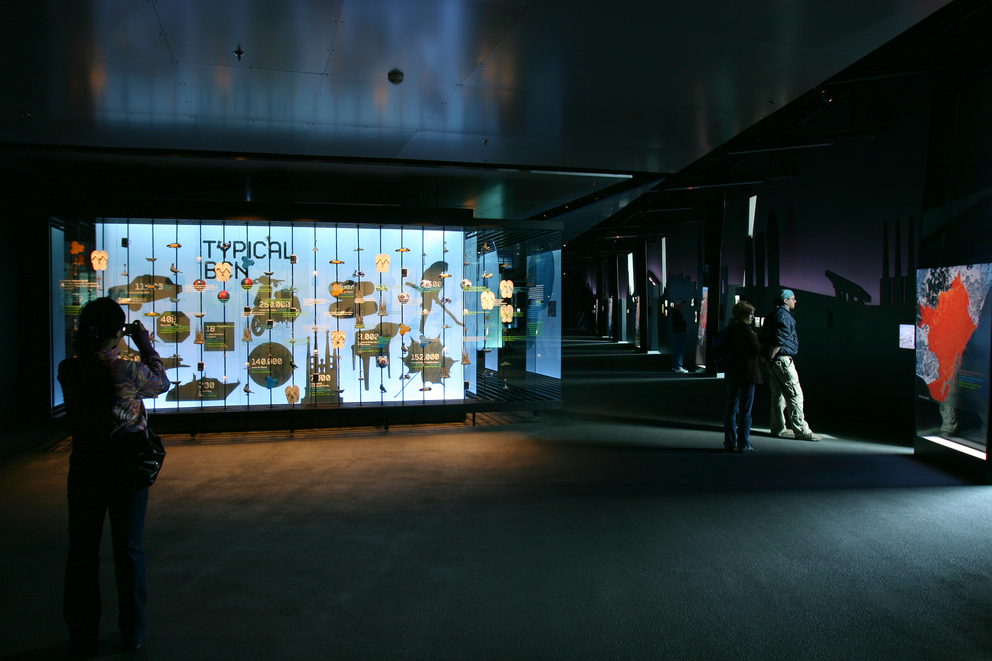 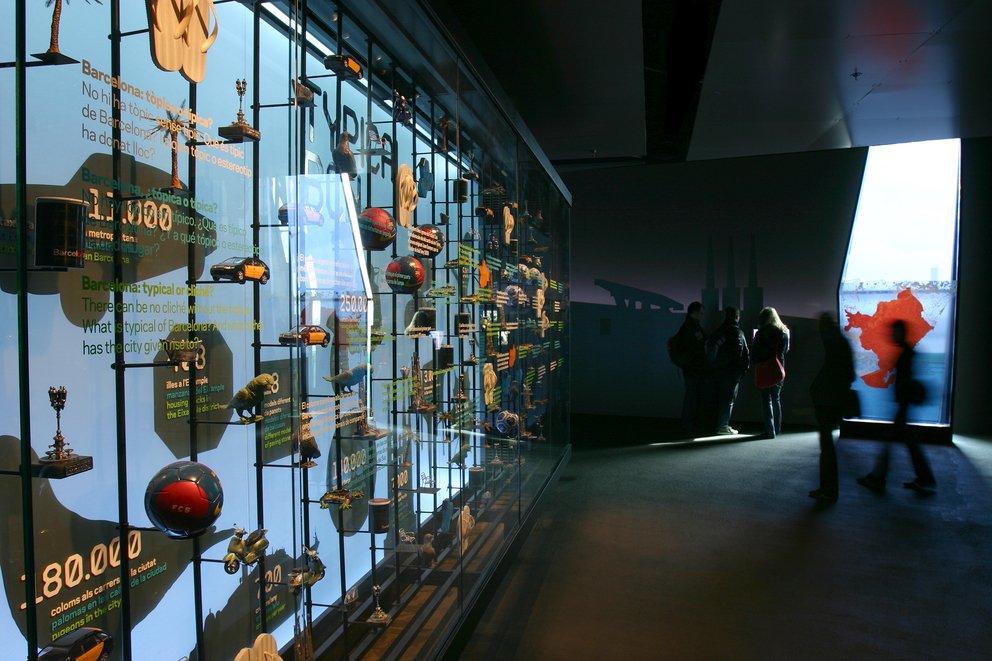 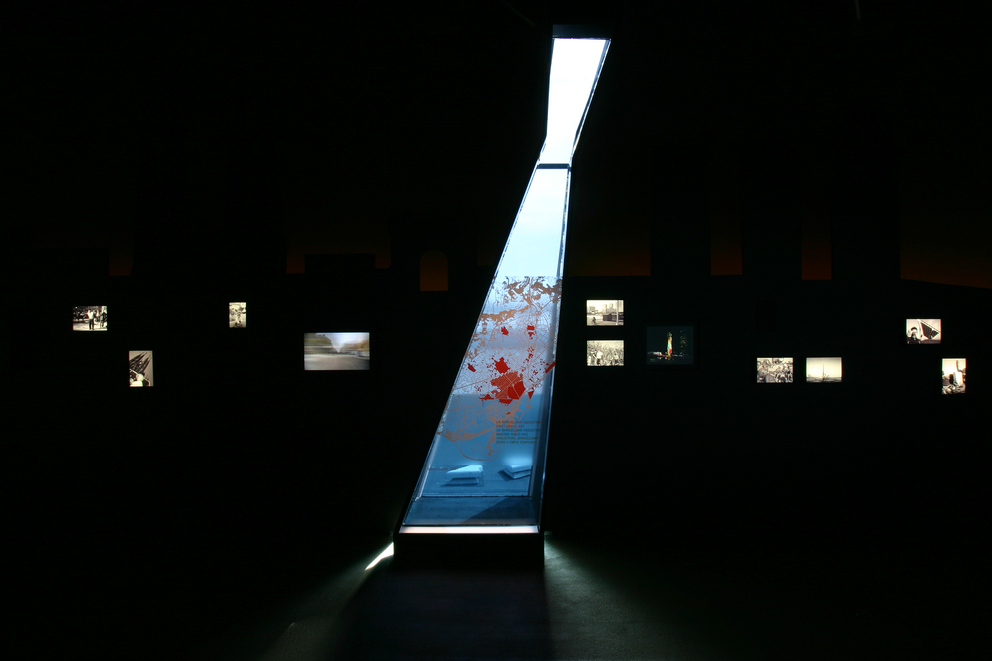 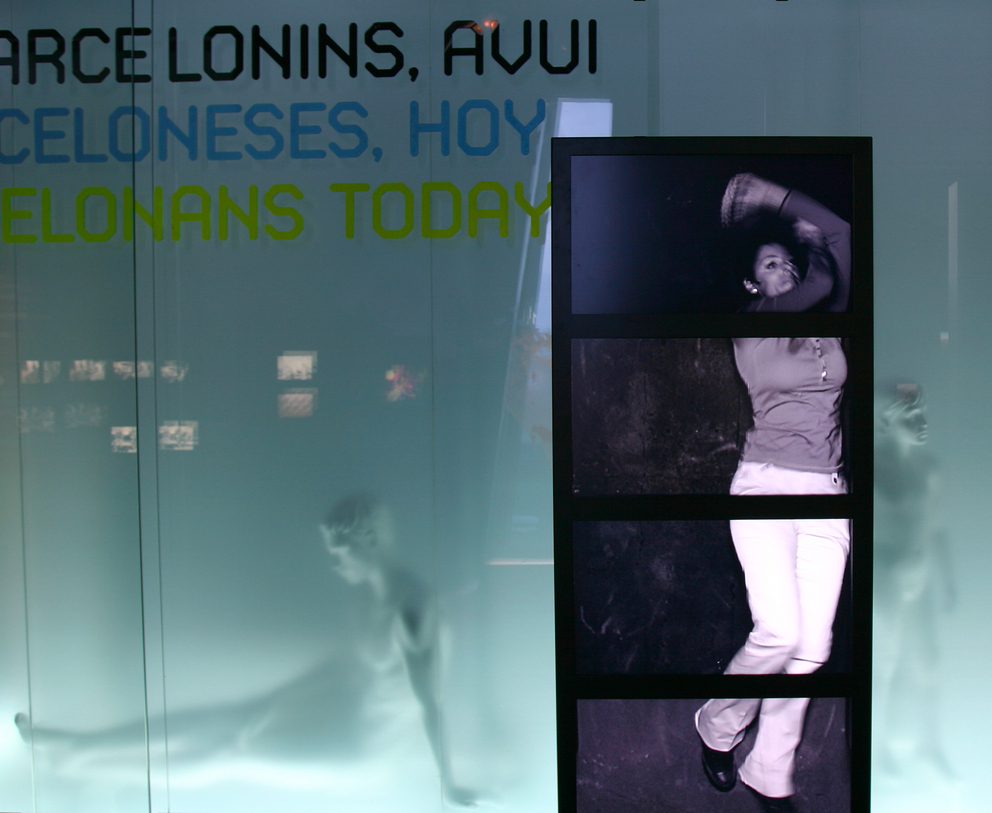 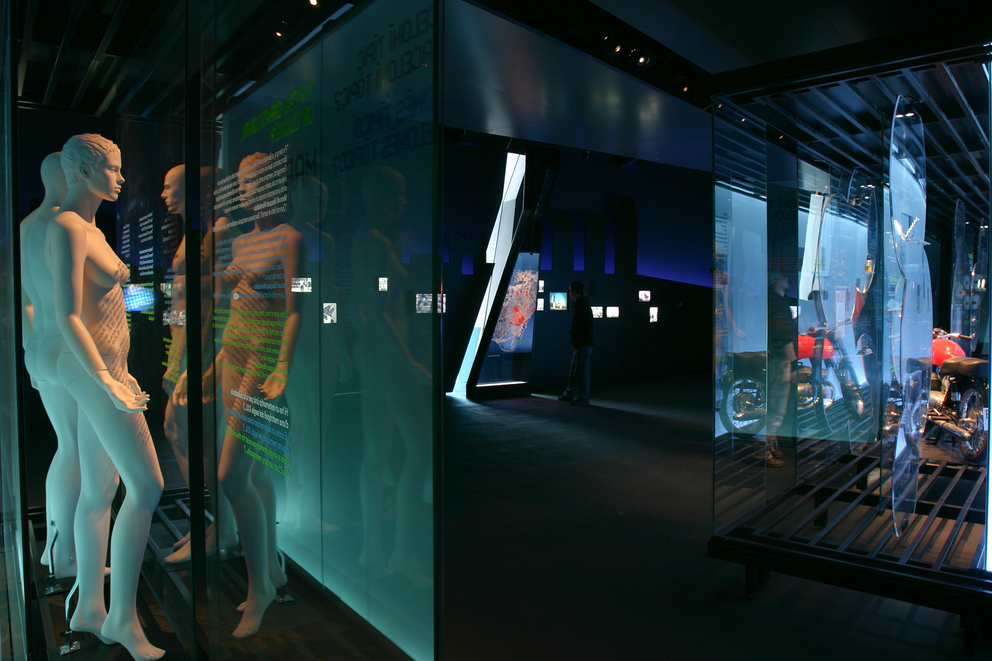 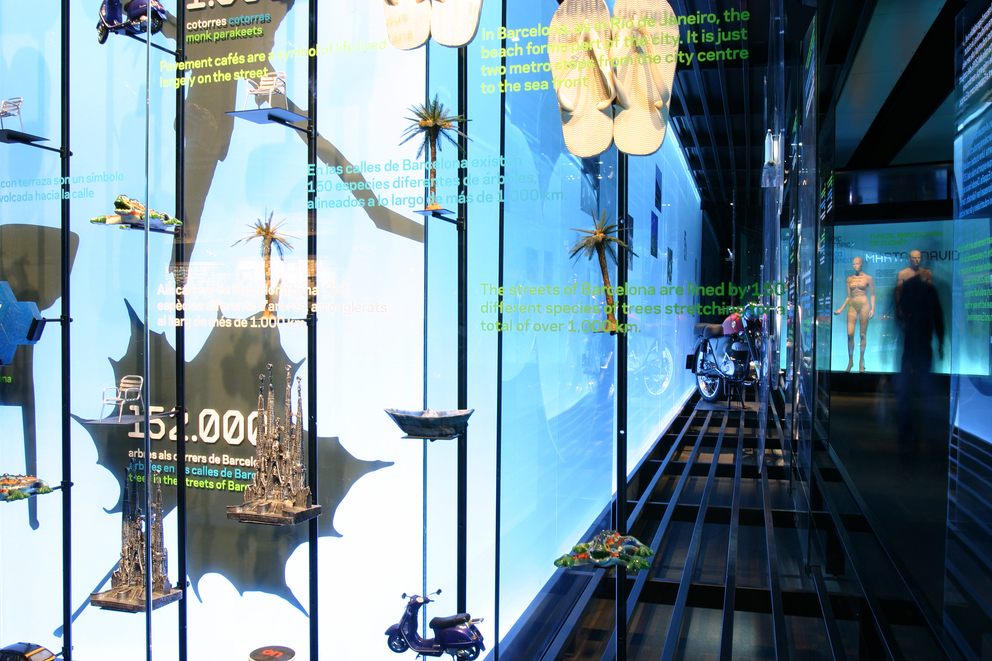 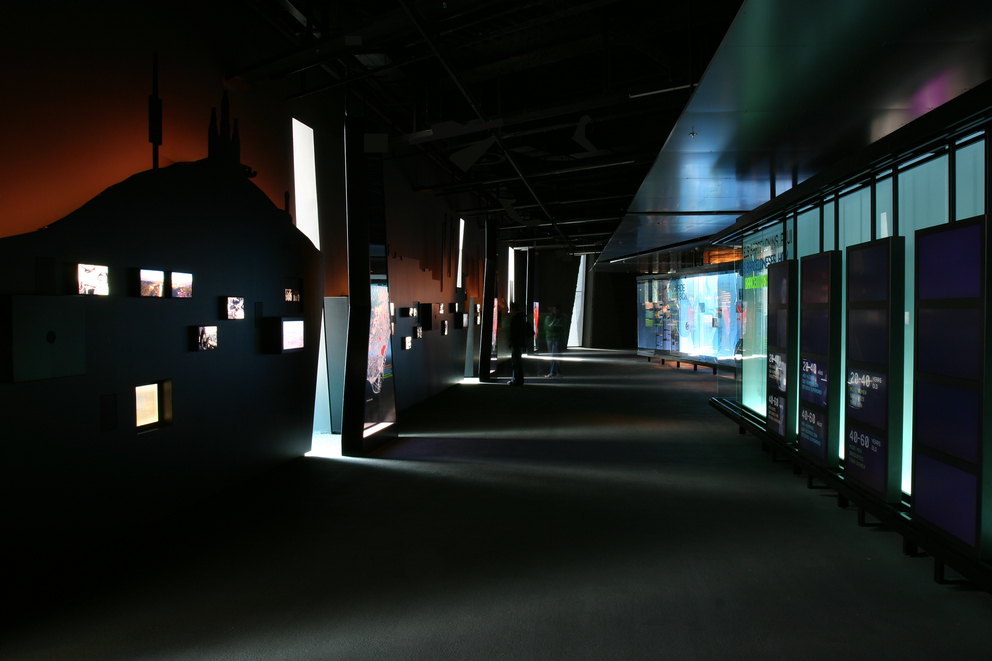 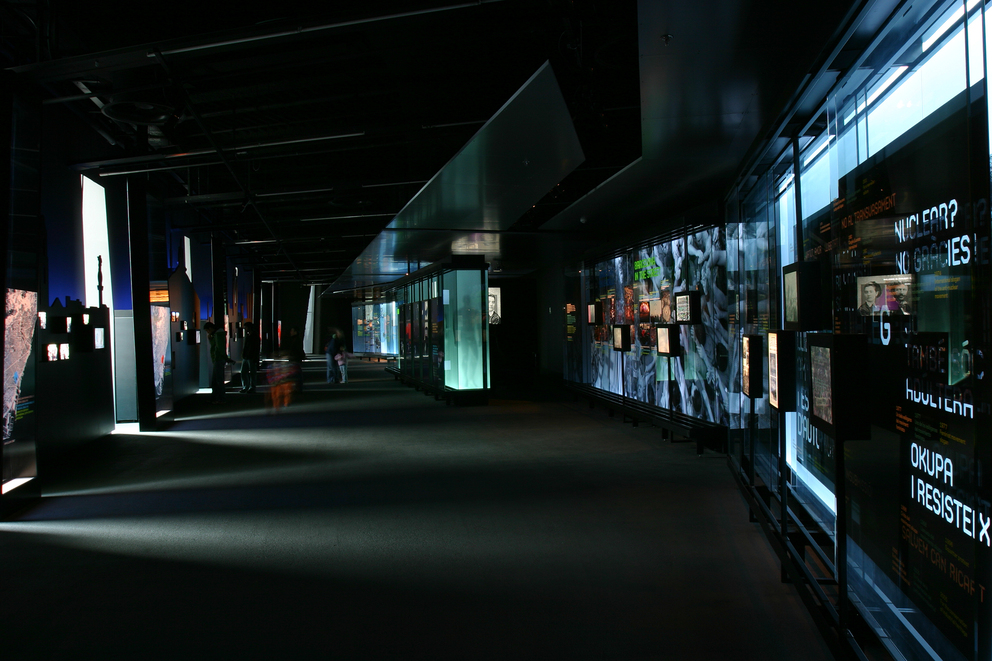 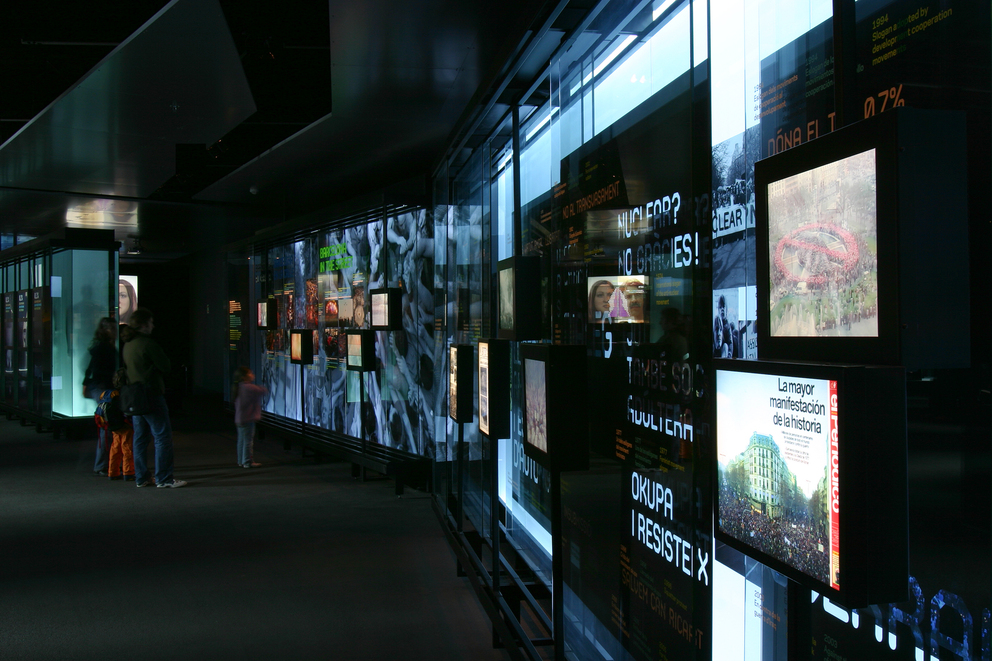 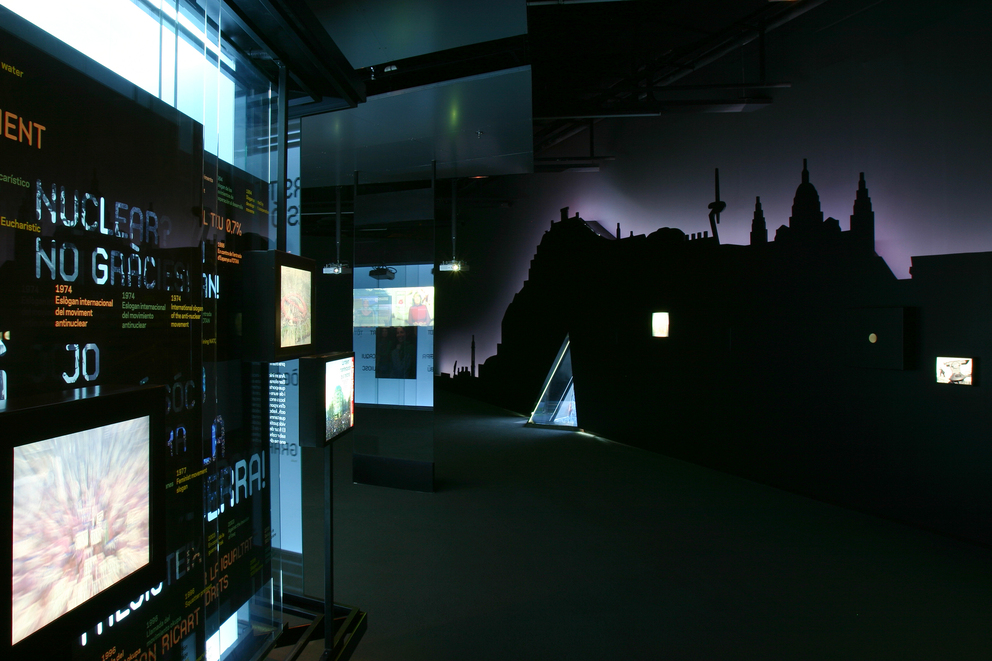 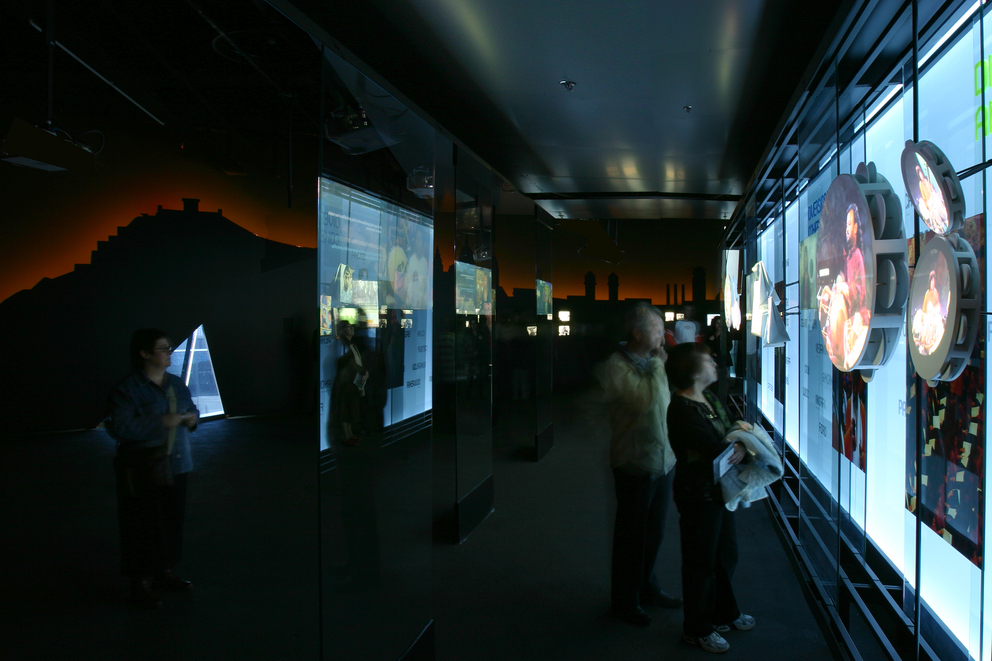 One of the principal criteria for creating an exhibition within the Forum building was to respect the special character of the building and work within the “black box” as independently as possible, avoiding links and connections between the pre-existing structure and the new exhibition spaces as much as possible.

The exhibition “Sensations” is located on the first floor of the building articulated by three key elements: The “Barcelona’s of the world”, the continuous “luminous showcases” and the “skyline”.

These three elements are designed to bond the great disparity of scale, type and dimension of the differing exhibition pieces and to create uninterrupted perspectives over more than 50 meters of length, whilst creating intimate viewing locations for objects less than 3 centimetres of size.

The exhibition opens with “Barcelona’s of the world”, a great luminous mapamundi which locates, contextualises and references the 40 different Barcelona’s in the world. An assembly of hanging screens brings the far away Barcelona’s into the view of the onlooker whilst a series of time laps narrate the 24hour on-goings at different places throughout the local Barcelona.

On entering into the exhibition, we find the principal players of the show, the “skyline” and “luminous showcase”. Both have a recognisable identity and their striking scale and format allow for a great variety of information (photos, text, objects, image, video etc.) to be inserted without loosing the visual coherence and entity of the visual sequence.

The “Skyline”, just like a large panoramic window, completes the real views of the existing windows with a museografic vision of Barcelona. The “skyline” is a portrait of the city that spreads along the inside of façade of the Forum building. It is made up from key outlines of monuments, buildings and topographic elements of the city. Encrusted and applied onto the thickness of this wall-piece are a series of peepholes, photographs, videos and soundtracks that narrate and explain cultural aspects of the city. A continuous line of coloured light draws a changing horizon over the panoramic view of the city of Barcelona.

The skyline is interrupted and divided by the existing windows of the façade. The resulting sections relate to the differing neighbourhoods, which in turn structure the displayed content related to this area of the city. The slightly displaced secondary sunscreens display historic information related to the actual views and extend the perspective of the existing windows even further.

Opposite the “Skyline” the “luminous showcase” unfolds its virtual panoramic view (a compilation of different aspects and themes of the city) along the blind interior wall of the building. Its structure is transparent and layered, thus allowing for the superposition information and exhibition material, which creates a three dimensionality and depth of field not unlike the proper view from a window.

The luminous showcase is a sequence of linear backlit elements which, in it variations, contain all the central exhibition material. The sequence of these elements is organised according to the exhibition chapters and represent three different city street blocks with supplementary spaces for projection space and background information. Light is the common denominator and central element of the luminous showcases. A light box, just as a proper window, emanates light whose intensity and colour is controlled in relation to the objects and elements on display and its positioning within the exhibition space. 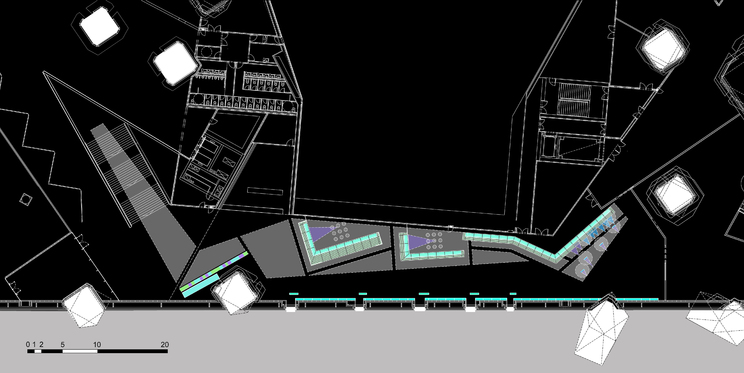 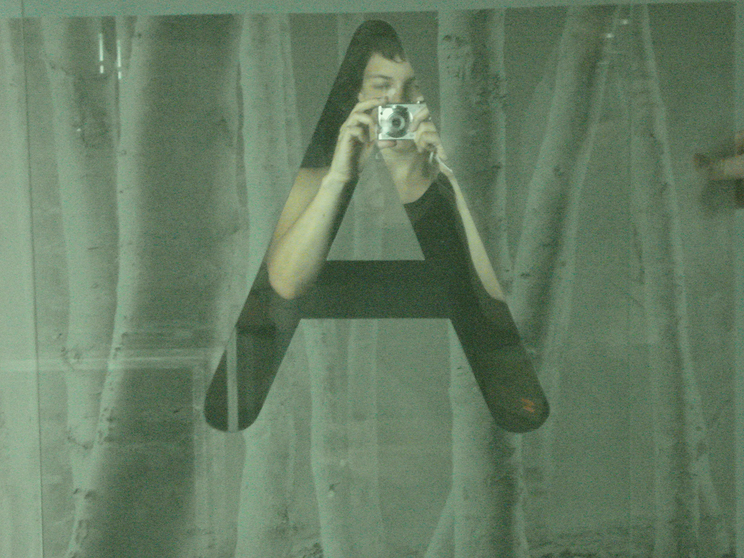